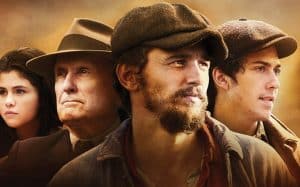 It is 1933 and the consequences of the Great Depression are still felt. London is one of the many workers who spent all he had to reach an apple field, along with her pregnant daughter and dairy. On his arrival, however, the landlord dims the agreed wage, from two dollars to a dollar a day, a figure that makes life impossible. Mac and the newcomer Jim are party activists (Marxist-Leninist), ready to infiltrate the gatherers to persuade them to strike and refuse the lack of rights and abuses they are undergoing. Mac, in particular, seems willing to do everything for the cause in which he believes, even to give a boost to events if needed.
After Faulkner and McCarthy, James Franco was fishing by Steinbeck, a hard and courageous novel, in which the Californian narrator put all parties involved under investigation, beyond his ideological sympathies, developing a title adjective on a tragic record , In Dubious Battle.
Franco shuffles the cards, drastically reducing the role of the doctor and stealing the point of view to entrust him to that of young Jim, around whom he builds a true novel of training. In itself, the director holds the part of the evil Mac teacher: a role other than secondary, and in fact the most faceted and heroic way, which Franco has wisely contained in an interpretation without exaggeration.
Elsewhere, instead, in the writing of the nodal chapters in terms of plot, as in many dialogues, instead of working on an already dense ground, the director opts to thicken the heavy-handed romance epos, and visual solutions Flat, almost invisible. Emblematic, in this sense, are the comedy scenes. For a novel that has been reported immediately and has been known for the truth of language – that is to say for laborious and creative research, of that linguistic realism – the transposition on the screen does not lead to any research and is limited to raising The tone of the voice of the orator of the turn, in the mechanical scenes of the comets that precede the passage to the work of the workers and dotted their path to the defeat.
The spirit of denunciation is intact, as is the strength of the themes at stake and the emotion that at some moments results from it, but instead of making use of the film, the ambition to make it a classic born with much musical rhetoric and massive participation Of known actors, weighs it unnecessarily on the invoice.