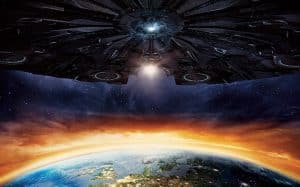 Twenty years after the massive and destructive attack that mowed three billion people on earth, David Levinson, a specialist in telecommunications yesterday, director of research and development today, discovers the threat of an imminent alien invasion. It does not need instead of sophisticated instruments to warn the alien enemy, Thomas J. Whitmore, former chairman of the US replaced by President Lanford, a strategically incompetent woman who relies on his generals. Whitmore is to warn the nations in the world direct and to throw them into utter despair. But ‘our’ will not fail to reach coalition and provided with extraterrestrial technology, recovered in the previous invasion. Against the monumental strength of the opponent lined up two rival drivers and a former president of heroic, willing to do anything to preserve his planet and protect his daughter.
After Under Siege – White House Down, fireworks blockbuster whose only decoration the White House, already attacked by Roland Emmerich in Independence Day – The Day After Tomorrow and 2012, the author takes up the old (and profitable) habits realizing the following Independence Day. the 1996 version, patacca devoted to the glory of the United States, compared to its descendant is the figure of the masterpiece.
Twenty years later, Emmerich and his clique of aliens stage a come-back which adds nothing, not even the consolation of seeing the usual save, once again, the world. Ideologically then it slips from Bush to Trump. The only progressive argument of the film is a woman President of the United States but the character is missing course of charisma and strategic vision, and you kill the first alien attack. The Chief of Staff to replace while the president ‘expired’ struggle, falls and rises again as Mazinger, which Bill Pullman mind “but everything else is saying.” At his side fights the rider Liam Hemsworth, who shares with the more famous brother (Thor) The Swoop on earth to ‘show miracle’ and save the girl. Like it or not, the Emmerich film has experienced a planetarium and refractory success at worst critics. undisputed king of the catastrophic trash doped with digital special effects, the German director moved to Hollywood has produced a question that no one like him responded and fed a genre to which he contributed more than anyone else (Godzilla, The Day After Tomorrow, 2012) . And the familiarity that entertains the audience today with the genre is the curse and fortune along Independence Day: Regeneration.
Curse because there is nothing left to invent and virtually more matter to impress, luck because the film keeps balance the pact with the viewer, who is not seeking more novelty and enchantment but try thankfulness. Maybe because in the Emmerich film there is always room (and love) for mass, an inclusive approach in which the world finds its place as the kids in school bus driven by Judd Hirsch. A genuine generosity that transpires in the dialogues of Jeff Goldblum, in every appearance of Bill Pullman in the air or relationship between Liam Hemsworth and Jessie T. Usher, which replace with reverence the charisma of Will Smith.