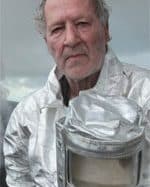 The fascination of Werner Herzog for volcanoes, cinematically speaking, dates back to the documentary La Soufriére of 1977, and has never diminished. Into the hell is a summa of his various shots across the world – from Australia to Indonesia, from North Korea to Iceland – in search of the world’s most impressive volcanoes, told not only in their scientific value, but especially in their magical dimension, and in their extraordinary ability to inform the world view of the surrounding communities.
The narrator, in addition to Herzog’s usual off-screen voice, is Clive Oppenheimer, a British volcanologist author of the essay inspired by Into the hell. And indeed the German director could not have chosen a better Virgil, from the point of view of the accessibility of the story: Oppenheimer is a sort of Danny Kaye of great human warmth and even greater dissemination capacity in conveying his immense scientific knowledge.
From the first scene, which makes us fall from the top of a mountain into the hell of one of the few volcanoes in which the earthly magma is directly exposed (without the “help” of 3D), we understand that this is Werner Herzog at its best: its kaleidoscopic curiosity, its ability to identify (and tell) characters out of the box more interesting than many heroes born from fiction, the empathy with which he approaches his subjects (never objects) creating that intimacy that opens the possibility to meaningful human encounters and to small and big narrative surprises, they contribute to create the story of a primordial natural manifestation that has its own heartbeat, and a powerful echo in the contemporaneity.
As in his extraordinary documentary Lo and Behold (also released this year, proving that the over 80 year old Herzog is inexhaustible in his desire and ability to tell the world) even in Into the hell the director approaches the volcanoes from a thousand different angles, some really unpredictable, and returns to talk about his favorite topics: the relative perception of time, in this case marked by the catastrophes generated by the earthquake; the instability of our existence on a land that does not stop moving; the spirituality, which makes the natives believe that the spirits of the dead live in the crater but also the demons from which it is necessary to keep a respectful distance because “the lava expresses the anger of the devils”, and that the volcanoes themselves can create a cosmology, therefore who takes possession of their symbolic value can assume divine characters, with all the risk that this entails.
That Herzog treats incandescent matter is evident not only in the close-ups of magma but also in the long excursus dedicated to North Korea dominated by the totalitarian regime and propaganda within which the dictator has encapsulated the superomist metaphor of the volcano referring it to itself, and in the closed dedicated to the will of an island community west of the coast of Australia to match the power of the volcano the seduction made of consumerist promises of capitalism Yankee.
Do not miss the usual irony of the director, which characterizes both Oppenheimer as some of the characters that Herzog meets in its research and the capillary in its vertiginous ascent to the roots of man: in particular an American anthropologist who makes Indiana Jones look like an amateur both as a scientist that as an entertainer. But other characters are also eminently cinematic, such as the historian and the Ethiopian fossil hunter, or the village chief of the island of Ambrym: their gravitas corresponds to the weight of the world.
To the bulimic curiosity Herzog combines that ten-year perspective that derives from his age as well as the vastness of his experience as a filmmaker and traveler. The result is a magmatic documentary (it should be said) that opens continuous windows (or chasms) on our Weltanschauung, but also contains an explicit invitation to get excited as children in front of the fire and its creative and destructive power, to breathe, again and again, the poetry of creation.