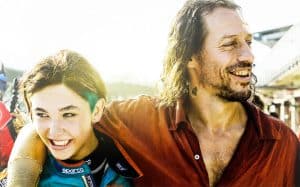 Giulia De Martino lives in a farmhouse in the Emilia Romagna countryside with her brother Nico. His mother is gone (again) of the house, and his older brother Loris, a motoring legend rally, has become a “toxic crap” parked in a trailer. When the father of Julia, who had bet on her as a future champion Gran Turismo using as collateral the farmhouse, leaving her alone, Giulia has to handle the eviction incipient, little brother lost his father and brother greedy inheritance. But the real legacy of De Martino is the gasoline flowing in their veins with the blood and the family talented, stubborn, angry, for the four wheels.
After two royal scion from a good family – Bad Girls and Drifters – Matteo Rovere finally comes out of Parioli and rediscovers his roots Romagna, complete with dirty fingernails of land and blood oaths in that dialect that dominates the world of motor sport Italian. With intelligence, sensitivity and taste Oak jumps at breakneck speed along a track full of dangerous curves firmly holding the steering wheel, with the support of a good script written in six hands, as well as by him, by Filippo Gravino and Francesca Manieri. The starting point is a true story told to the director by a mechanic who died last year, when the big screen gives the lined face and the acting measured the great Paolo Graziosi. The style is that of genre film, but more than the motor movie style Rush Oak draws all’underdog movie athletics matrix at Rocky or Flashdance, adding a pinch of madness from the farcical race movie Those Magnificent Men in their Flying Machines.
They fly really, racing cars of Fast as the wind, as they are really mad and disperatissimi their pilots (which inspires the best line of the film), young or old, male or female. Because one of the (many) advantages of Oak film that tells (without stress with easy rhetoric and even easier flattery towards the female audience) a world where equal opportunities are real: Giulia has always competed with the men pilots, and all that matters is the asphalt burning and determination to prove who knows the wheel.
Matilda De Angelis, in his feature film exodos, is perfect in the role of a 17 year old that has the engine in the DNA but also adult responsibilities and feet firmly on the ground. His look under the helmet mixes terror and adrenaline, his immature body communicates fragility and determination. Its sober and authentic acting, that goes well with that of Giulio Grazioli and small Pugnaghi in Nico shoes, is in contrast to the container and over the top of Stefano Accorsi, who at first seems gigioneria and instead gradually conquering dignity and charisma, to become the brilliant characterization of a man balanced on a steep ridge, a loser glorious worthy of that universe and swashbuckling epic that is the world of racing, whether on the Formula one circuit or on a dirt road. Past the middle of the journey of his life Accorsi rinses the clothes wisely in the Po and not only dusts off his accent (pre Maxibon) but also acquires a farmer in Lower posture, and draws upon the hunger for the Vasco life first manner and anarchic poetry Liga (Antonio, more than Luciano). The race times are convincing and allow themselves to follow even by those who do not know or appreciate them, and never favor the technological skills than the humanistic dimension of the story. In this sense Swift as the wind is analog or digital, and the special effects are vintage as the honor code of Loris De Martino.
The Oak films is part of the rebirth of Italian cinema which tackles the genre to transcend it, and rooted in localism after learning deeply the lesson (film) of globalization. Above all, does something great shows to young generations, through the mouth of a forty year old who was burned and destroyed the car with which ran twenty years ago (not a random date), you should, and can, take risks, that we can, and must, fix what we (or was) torn to pieces, which is licit to (the) evil but (car) repair. Prove to be afraid to cut the curb (or the umbilical cord) away from the finish line, and that girls are not doomed to be humming with blue wings, but they can become contenders.