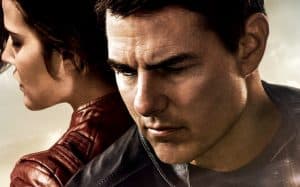 Jack Reacher, a former US Army major, and now wandering perpetually thirsty for justice, he returned to Virginia to fulfill the promise of an invitation to dinner with Major Susan Turner. But it turns out that this has been put under house arrest with very serious accusations. It all happened very quickly, and Jack does not add up: as it deepens the investigation of what happened, the matter becomes more cloudy. Because the documents that emerges discovers an alleged daughter of which he was unaware.
Edward Zwick inherits a still young cinematically franchise, with the dual objective of keeping faith with the millions of readers of the series of novels of origin and not to disappoint the increasingly demanding audience of action movie. The film body for American excellence of action, Tom Cruise, begins to feel the weight of years, but does not give to exhibit their own body and to remain at the center. Mask the old becomes the imperative of Zwick and stunt coordinator Wade Eastwood, already with Cruise in Mission: Impossible – Rogue Nation. The dynamism of Cruise turns into physicality, replacing the Ethan Hunt acrobatics of wild melee, brutal, where it seems every punch thrown by the Bane of The Dark Knight – The return (even if the declared model is The violent arm of the law) . About Cruise, which accentuates the gap between the Hunt in Mission Impossible and Jack Reacher (a human mountain for height and weight in its literary incarnation), featuring more the second, and its antagonist Patrick Heusinger, unsuspecting beast of war that makes concrete and palpable threat against the supposed daughter Samantha. The villain as the hero’s nemesis, equal and opposite, knows now stravisto gimmick (Skyfall, Mission: Impossible -2, and be confined to a couple of citations), but the atmosphere of B-movie with no particular ambitions facilitates the indulgence .
The predictable subplot, which insists on the lone wolf nature of Reacher and thus his or her repressed desire to put his head in place and feel part of a family, the right is exploited by a simple but effective script. Both in skirmishes between Reacher and Major Cobie that between them and Samantha shows the psychology of stereotyped characters, but in a manner so aware (and self-deprecating) that it is almost characters in a comic book by Garth Ennis, understandable and appreciable in their coarse instincts.
If it is obvious how things go between good and bad (we’re not in Hong Kong but in Hollywood, and the protagonist is Tom Cruise), the real whodunit, cha keeps the suspense until the epilogue, it is the mystery of the alleged paternity of Reacher , surprisingly eager to “hang on a nail” the inseparable toothbrush, although unable to admit it to himself.
Finale in New Orleans, with the shadow of James Bond Live and Let Die and around the corner, and feeling raw fun but carefree. All in all, achieved a minimum goal.