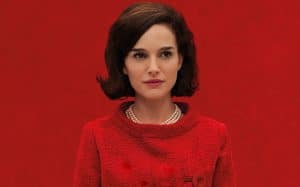 Five days have elapsed since John Kennedy’s death and the press knocks on Jackie’s door to ask (rendered) account. A detailed report of the Dallas facts. Cigarette after cigarette, Jackie will restore the truth and establish her story through Theodore H. White’s “Life” political journalist. A tale that his interlocutor draws and Jackie re-reads, corrects, manipulates, refines to tell the world of Camelot, the war, the lady and the knight who made the enterprise and history down to the decline of their good star.
Between the truth and the fairy tale is Jackie. That of Pablo Larraín, isolated on an autumn day, after the assassination of his wife and before his retirement from public life.
A time-space interval that the Chilean author rebuilds in a historical-clothing film, seeking personal identity behind that dummy, along the White House corridors and rooms, under silk and crêpe tailleurs, in front of unarticulate mannequins dressed By Chanel. And in the silhouette of a mannequin, which the protagonist looks in the shop windows of a boutique, beats the heart of an inflexible portrait that contrasts with the round of Neruda. Different in the sign, however, the two works go vigorously between History and Fiction, dominated by a kind of insolence underlying the author’s cinema. On the one hand, the celebration of artistic creation, its aspiration to sublime and its compromises with reality (Neruda), on the other hand, the expressive gesture that develops a personal style and builds a public image, a verbal and non-verbal conduct Gestures, hairstyles, dresses, jewelry and attitudes (Jackie). In Neruda’s way, Jackie’s fictional character is set by the first sequences, Jackie’s meeting with the “Life” journalist is divided into plans spread out in different décor (confession with the priest at the cemetery, the White House tour with CBS News, etc.), indicating the impossibility of reconstruction based on memory alone. Uncertainty is Jackie’s very foundation. This is the basis for an extraordinary creation of fiction that Larraín consecrates to the relationship between body and habit.