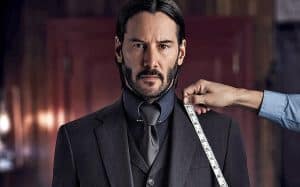 John Wick is declared “excommunicado” by the High Table, which places a $ 14 million bounty on his head as a result of Wick’s unauthorized killing. At first, Wick travels to The New York Public Library and picks up two hidden objects . Wick is chased by a gang in an antique warehouse that leads to a bloody fight between Wick and the gang .
Meanwhile, after surviving the fight in the warehouse, Wick visits the director who also happens to be a member of the High Table. He puts his hand over the crucifix necklace as a form of coin that allows it to safely pass into Casablanca.
In Casablanca, Wick visits a local branch of the Continental and meets Sofia from his past who has to do him a favor.
Sofia accepts and takes Wick to a local named Berrada. Berrada tells Wick Elder’s location in the desert. With the help of the two trained dogs, Sofia and John struggle to get out of the area before travelling to the desert. After completing her mission, Sofia leaves. John continues to walk in the desert alone, before collapsing due to exhaustion. John is found by a passing traveler and taken to Elder’s place. The old man gives John the choice between death or acceptance of a mission to kill Wick’s friend Winston in the name of the High Table. John accepts the mission and, as a demonstration of commitment to the High Table, gives the wedding ring to the Old Man.
Wick is chased by Zero at the Continental where Wick takes the sanctuary. Wick talks to Winston, who tells Wick he’s aware he’s there to kill him.
The auctioneer contacts Winston and offers the chance to negotiate, eventually agreeing to stay at the Continental. Winston betrays Wick, shooting him before Wick falls off the hotel roof. The auctioneer leaves Continental, but notices that Wick’s body is gone. She informs Winston, and both agree that Wick continues to be a threat .