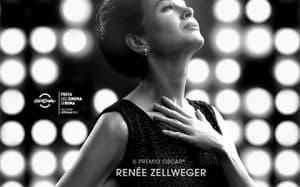 In the last period of her life, Judy Garland is still a name that arouses admiration and the memory of a golden age of American cinema, but she is also alone, divorced four times, without the voice of once, without a cash and without a contract, because it is considered unreliable and therefore uninsurable. For the sake of younger children, she is forced to accept a singing tour in London, but the return to the stage also awakens the ghosts that have always haunted her.

The Wizard of Oz was the masterpiece of the Studios era, a film in a sense without a director (he had four), in which each department worked hard under the guidance of Louis B. Mayer and everything was done artfully and everything was artifact.

Judy Garland herself became a creature of MGM, which led her to worldwide success, deprived her of sleep, appetite and imposed on her a diet based on sleeping pills and antidepressants that she was never able to abandon.

The biopic of Rupert Good, former director of a drama on identity theft (True Story), together with the heartbreaking interpretation of Renée Zellweger, I am here to say that behind the plastic birthday cakes, behind the stage clothes and the rules of fiction, there was a woman who really suffered, who loved show business as a parent, seeking her applause first of all, and was devoured by it.

Of course Judy Garland was not only Dorothy Gale, but the Kansas girl who sang her dream leaning against the fence, became an immortal icon and Zellweger shivering, pulled and hunched, for how she manages to replicate the sound of her voice in speech, while the script moves back and forth between ’39 and ’69, disavowing everything else to focus on the beginning and the end, the pact with the devil and the moment in which this began to ask for the bill .

“There’s no place like home,” said Dorothy at the end of her technicolor adventure. And Judy reaffirms the concept, from a more dramatic and terminal perspective. The actress does not have a home, nor the money to pay for it; therefore she is forced to perform for money, away from her children, making “family” with those who give her some time and selfless company.