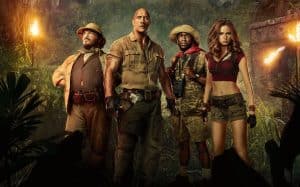 Jumanji Welcome To the Jungle

1996: The Jumanji board game box is found on a beach, exactly where we had seen it at the end of the original film, but when the guy who takes it home understands what it is he is very disappointed, because it interests him only videogames. So in the night the game turns into a console cartridge. The same is found today by four high school students in punishment, who choose the remaining four characters of a game for five players and make the mistake of interrupting the game, ending up trapped in the game and the body of the characters they had chosen. So the nerd is a barrel, the black athlete becomes a comic shoulder, the girl is a little girl who waves kicking to the rhythm of music and the queen, perennially in the hunt for like on the social, is found to be opposed in the body of a man of half overweight age. Together they will have to overcome various challenges and bring back an enchanted jewel on top of a mountain: only in this way will they be able to return home.

If in the 1995 film the game entered our world, now the protagonists are entering the game, showing us the other side of Jumanji, but updated to the rules of video games.

The first character they meet repeats, in fact, limited phrases like a PNG (non-player character), imprisoned in a functional program to explain things to the “players” and to deliver the necessary objects to them. Even the flashback, within his story of the antimatter, is experienced by the players as a non-interactive scene, which can only be suffered, and whose term videoludic is cutscene. Not to mention that the protagonists have a limited number of “lives” and, as long as they do not exhaust them, they fall from the sky as new when they are killed. The nerd boy obviously knows how to recognize these game mechanics and does not fail to explain them to other characters and therefore to the public, on the other hand the didascalismo is one of the figures of the film, which seems to be afraid of being too niche to be truly mainstream.

The most interesting and fun thing about the new Jumanji, however, is not the very rude aspect of the metal, but the relationship between the action-movie actors sui generis and the characters inside them. So The Rock has the ability to be super-charismatic but also afraid of a lot of things, because after all it is still played by a nerd; the very tough girl is actually very insecure; the beautiful in the body of Jack Black then lightly transports a trans positive message, since after the shock seems to adapt soon to his body and appreciate the genital organs. On the other hand, the athletic black dropped into the comic shoulder, which continues to complain about its misfortunes just like any comic shoulder, and also has the same shrill voice (at least in Italian dubbing) and the propensity to shout – as indeed he had the black police officer in the original film.