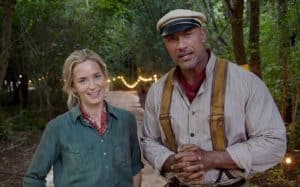 Disney tries again: the Mickey Mouse company launches a new film that is based directly on a historic attraction in the Disneyland park. Jungle Cruise is in fact a new original production that draws its narrative cue from the water park of the same name which is located in four different Disney parks around the world.
The plot of the film, set in the early 1900s, tells of a scientific expedition, led by Lily Houghton, set up to find the Tree of Life, a mythical plant with enormous healing powers that seems to be inside the jungle. Next to Lily are Frank, the captain of the river boat who will guide her inside the green tangle, and the younger brother McGregor. To put the sticks in the team’s wheels, however, there is a rival expedition that intends to get to the Tree first.
Debut in a Disney production for Jaume Collet-Serra who, after a string of hard and pure action movies, comes for the second time in his career to a production for the whole family (with a more or less similar target audience, in his career he has directed only Living a Dream – Goal! 2 in 2007). Jungle Cruise aims to reproduce the glories at the Pirates of the Caribbean box office and is a project that the Burbank company is very fond of: Disney wants to return to making the big voice even with “endogenous” productions after the success of the last Marvel films and of the Star Wars saga.
No expense was spared for the cast, hiring two ninety pieces such as Emily Blunt and Dwayne Johnson for the main roles: if the English actress represents absolute certainty for talent and skill, The Rock has built a reputation in recent years “hero for the whole family” granite, which led him to mix the element of the action, still very central in his films, with that of the comedy, finding a huge response in the audience. At their side we find a very solid battery of characters: from Édgar Ramírez and Jesse Plemons in the role of antagonists, to Jack Whitehall in that of McGregor Houghton and Paul Giamatti.