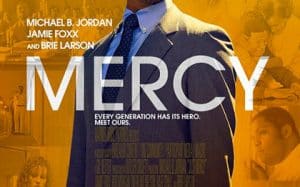 Bryan Stevenson is a young African American law graduate from Harvard. He may have made a career in the North of the United States and instead chose to work, largely pro bono, to defend the condemned to death in Alabama, many of whom have not benefited from a regular trial: and almost all are black like him. Among these is Walter McMillian, on death row for the murder of an 18-year-old white woman: a crime to which he is completely foreign, but for which a culprit had to be found quickly, to “calm the community” (white).

Based on the true story told by Stevenson in the book “Just Mercy”, The Right to Oppose is the account of a battle against injustice and racism in the state made famous by Harper Lee with his “Darkness Beyond the Hedge”: l odyssey of an innocent wrongfully accused of a murder and defended by the courageous lawyer Atticus Finch.

Destin director Daniel Cretton continues his artistic partnership with Brie Larson, who plays the role of a local lawyer here, to tell a story of injustice and prejudice which, like many films of this period, depicts the ritual humiliation of African Americans leaving from the most common of the Yankee police abuse: unjustified detention, often accompanied by mortifying searches.

Stevenson voluntarily enters an abyss of impropriety and racial discrimination because he knows what it means to be born black in America and be labeled on the basis of the color of the skin. “Just look him in the face” is in fact the motivation given by the Alabama authorities to incarcerate an innocent, and the “Lombrosian” accusation hides a deep fear of the different.

Cretton reconstructs Stevenson’s story by fully embracing his point of view, and this unfortunately makes the story less effective. But this (umpteenth) story of racially motivated injustice is the portrait of an America that still today tolerates unjustifiable disparities. The story narrated in fact does not happen in the fifties but in the nineties, yet it meets the resistance and obstructionism of the era preceding the battles for the civil rights of African Americans.