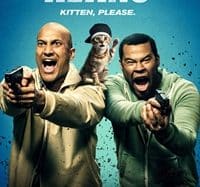 Based on a screenplay by Alex Rubens and Peele, the film tells the story of two cousins (Keegan-Michael Key and Jordan Peele) who crazy after knowing the abduction of their adorable kitten named Keanu. The two decide to mingle with malevivants and drug dealers, even to bring the knife back home.
The film is directed by Peter Atencio and will be released in American movies on April 29, 2016.