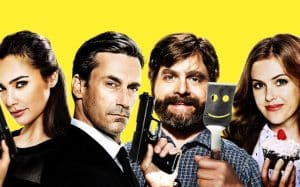 Keeping Up With the Joneses

Interior decorator she, human resource manager he, Jeff and Karen live in an Atlanta suburb. Married and laid down are waiting to know their new neighbors. Satisfied curiosity from the arrival of Tim and Natalie Jones, an incredibly cool couple. Too beautiful to be true, the Jones have some suspicion in Karen determined to know their secret. Jeff, on the other hand, seems happy to have found a friend and rejects the paranoia of his consort. But Karen is right to sell. Tim and Natalie are not anyone who says they are. Government agents with the permission to kill between a neighbor’s barbecue and the blown glass hobby, Jones give a shock to Gaffney’s life, precipitating them in international espionage.
Combining a yellow and romantic twist, Greg Mottola signs a short-acting comedy. It is not the chase to take away the narrative but a slim script that exhausts its potential in the first twenty-five minutes, when the next door spies try to decide which foot to advance.
Mottola tries to create a suspense on the true nature of Jones’s neighbors, but the Italian title annuls the Twist in a breath. The original, Keeping Up with Joneses, had at least the merit of cooking longer in the oven the secret of the Jones, then unknowingly revealed in the trailer. In this way the interest expires soon and the actors do what they can to not succumb to a story that dwindles without ever taking off. Isla Fisher and Zach Galifianakis are two comic forces that the film is committed to seduce, lacking the collision between sophisticated mistery and triumphant slapstick madness. The perfect plasticity of Jon Hamm and Gal Gadot is reduced to mere object of pleasure. Hamm’s seductive protery and the sophisticated exotic Gadot end up wasted in unenviable action scenes and an adventure that delights to remake Mr. & Mrs. Smith. But in this coup de théâtre round the secret is not between the spouses but among neighbors close. It is also impossible in America to escape the curiosity of the province.