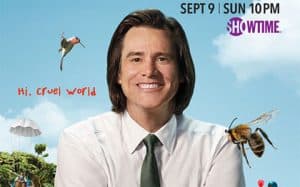 Jim Carrey makes his debut in a series of qualities and in doing so he relies on trusted hands, those of the genial and eclectic Frenchman Michel Gondry. We reform the marriage that gave life to If you leave me you leave, in a comedy Showtime, where Carrey is already producer of I’m Dying Up Here. The protagonist is Jeff, aka Mr. Pickles, a darling of TV for children and a model of kindness and wisdom. When however his relationship with his wife and children goes into crisis, Jeff starts to lose his head. Devised and scripted by Dave Holstein, it seems perfect material for the direction of Gondry, which will also make use of other great actors like Catherine Keener, a veteran of parts between reality and fantasy in Being John Malkovich and In the Land of Wild Creatures, and Frank Langella, come back on TV with a recurring role in The Americans.