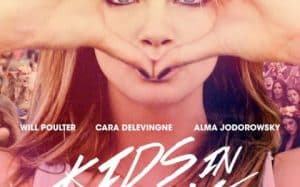 In a trendy London club, Jack, about to leave with his best friend Tom for his vacation in South America, so he put aside all his savings, he meets Evelyn, a beautiful and mysterious French girl, and her friends, her sisters Viola and Elena. For Jack it is love at first sight and the next day he goes to visit Evelyn, who lives with Viola and Elena but also the volcanic Cassius, in a shabby chic house. This sort of bohemian commune attracts Jack as a honey fly, also because the boy, after his holiday with Tom, will start the life planned for him by his parents: the college in Bristol and an internship (unpaid). In reality, Jack’s dream is to become a photographer, and the closeness with the new creative and dissipated friends will push him to test himself with a Pentax found by chance.
Kids in Love is a story of training as there are a thousand, and tells a group of twenty with a coté of privilege really irritating: no one works but the villa they live in is very luxurious and there is a Rolls Royce parked in the garden . Even Evelyn, undecided between Jack’s attention and the charm of bad boy Milo, who by profession is the prosecutor of occasional lovers to the rich homosexuals of the city, is an unsavory character. After all, the female protagonists are three young models: Alma Jodorowsky, grandson of the Chilean director Alejandro, is Evelyn and the it girl Cara Delevingne and the rising star (in the fashion world) Gala Gordon, best friend in the life of Delevingne, are Viola and Elena. In addition, Preston Thompson, who plays Cassius and co-directs Kids in Love with Sebastian De Souza (who plays Milo), is the son of the owner of Ealing Studios, the film’s producers.
What saves Kids in Love from being a self-fulfilling apology of the rich and sleazy London youth is the honest and deep performance of Will Poulter (already seen in Revenant) and the skill of the thirty year old director Chris Foggin, here at his debut, in telling a moment in life – youthful love – with watercolor tones and a slight sense of intoxication and dizziness. The sweet softness of the images of Kids in Love therefore find in Poulter the ideal interpreter, the only one with whom we can identify ourselves. Nothing new under the sun, but this story of how, through a short walk along the wild side, you can find the courage to do what you want, in addition to what you must, lets see without leaving with the bitter in the mouth.