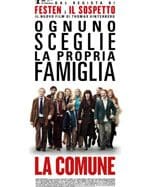 Copenhagen 1975. Erik and Anna, architect and teacher he and presenter of TG her, have a teenage daughter and are found to inherit a very large house. Anna has an idea and pushes her husband to accept it: to invite some friends to live with them, giving rise to a common. Soon the group is formed and gives the rules are not always respected by all, but between meetings, dinners and Christmas parties things seem to work. Until a new person enters the life of Erik mutating his prospects.
Back in 2000 with Lukas Moodysson’s Together – Together with his second film won numerous awards with a reading of the seventies seen through the eyes of a child brought by his mother to live in a commune. Moodyson is Swedish but the co-production was also part of Denmark. Today is a Danish Thomas Vinterberg as to return to the subject, however, changing the point of view also because in a commune lived there from the age of seven years to nineteen. then able to read the dynamics and utopias with the detachment given by the passage of time but also with the understanding and the indispensable participation.
His Steffen, Allon, Ole, Mona and Companies with the two main protagonists give everyone the feeling of not characters of a script but of people with their impulses, their reluctance and even small or big egos. They are joined by the teenager Freja and a child who uses as an element of attraction the hearing by doctors who do not exceed nine years of age. But when Erik falls in love with Emma, ​​his student, everything changes. Because one thing, Vintenberg reminds us, it is theorized, and it is one thing to face a new presence that changes the balance. Of the pair, and then the apparently exceeded ‘family’ formed by Anna, Erik and Freja and, consequently, of the entire community.
After leaving the small village where the injury was hopelessly road Suspicion and having granted a literary spell with from the Madding Crowd, Vinterberg returns to make us reflect on the human complexity and beauty (but also the fragility) of some utopias. It does so with a light hand, but knowing how and when to bring out the deepest instincts and hardly controllable by the individual even when a kind of new conformism would push the group to hide the most difficult situations. Because its adults end up, despite the proclamations, with the losing in whole or in part the chance to really look forward in a renewal that inevitably ends up becoming preservation of himself.