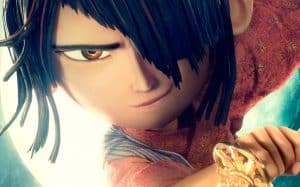 Kubo and the Two Strings

Kubo is a storyteller. By day the village plays and sings the exploits of stories without a final, animated in front of his road through origami; night instead of hiding from a hidden enemy who seeks to deprive him of the only eye he has left (the other is blindfolded): the grandfather. Latest in a family linked to magic, living with a mother who seems to have lost all strength to fight and that when his grandfather find them, disappear in an effort to scare away the son. Thus began the journey of Kubo, along with a giant cockroach and a monkey, looking for a helmet, armor and a sword which together will enable him to overcome the cumbersome grandfather.
Masked, translated, hidden and put in the form of allegory, there is a history of training and neglect of the family nest behind Kubo and Magic Sword. And the more this cartoon stop motion adds layers that prevent truly discern its nature, the more it seems charged with a romantic and lost sense. More that moves away from its essence (a boy becomes a man emancipated from their families), most can tell this step seasoning it with an epic taken directly unspeakable intimacy of each.
In search of the three elements that will free from the persecution of his grandfather’s legacy, Kubo loses and finds his parents, face the weight of their roots and comes out the winner so they do not need to destroy the enemy, but they can afford to incorporate them, creating a peaceful relationship with its past.
The Laika, the animation studio in stop motion in charge of small gems like ParaNorman but also masterpieces like Coraline, enjoys playing with his putting clay in the hands of the protagonist origami (true ancestors of this animation technique) in the shape of instrument of combat and story, pliable material that comes to life as it happens with the same stop motion.
Despite little creatures that are the silent helpers, debtors of the Disney tradition, Kubo and the Magic Sword owes nothing to anyone. The Japanese environment does not imply a style of Japanese research, nor for that follows the US animation business. Proud of their identity this film proceeds independently. This, however, implies a certain weariness and a clear difficulty in managing the bombastic action sequences. Kubo and the Magic Sword, despite boast an adventure story, does not have the ability to give him the inspiration shown in the rest of the film. Flat and repetitive, it seems to despise the fighting and the rapid movement for preferring the construction of the dialogue scenes or the most inventive tale sequences. Even the great metaphor of the storyteller without a finish that looks for a closed to its own history, longer turns around to his being told that to her becoming act. Unfortunately it is not just for a film that rests on a fight against a well-defined set of enemies his allegory of the war to assert himself.