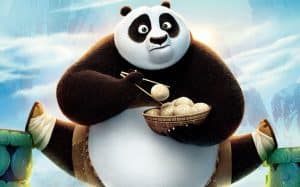 The evil Kai, supreme warlord of all China, finds a way to escape the spirit realm where he had banished his former brother Oogway weapons, and is willing to attack the valley and destroy the Jade Palace to steal the chi – the energy that animates all living things – of his enemies. To stop the fate requires the intervention of the dragon warrior, and who else is the Dragon Warrior unless Po, the Chinese panda versed in martial arts who starred in the first two episodes of the Kung Fu Panda franchise? But Po is far from dominating his chi, and from having figured out who he is: it does not help the fact that he grew up without parents and call dad a goose visibly affectionate but not belonging to his species.
The path to self-knowledge for Po begins to unravel just when you will live his natural father Li, who will reveal the existence of a secret village of pandas and start towards the rediscovery of his belonging to the species of Chinese bears. But it will take all your heart and the courage Po – and the help of the wise Shifu, the Five cyclones and both his father – to meet the threat of Kai. And the rescue will pass for an art (not martial) for which Po did not believe to have no talent: teaching.
If this plot may sound complicated, the hour and a half of film narration is able to bring Kung Fu Panda 3 understandable even to children through the varied recurrence systematic but that is the basis of all effective teaching. The other key to the comprehension of the story – and the effectiveness of film narration – is the lightness with which Kung Fu Panda 3 deals with philosophical themes (and religious) rather heavy. As in previous episodes, the extra gear is speed: The action is always lightning fast and elegant as a move of kung fu, the use of animation techniques (and film) mixed, as the transition from 3D images to those 2D, the graphic novel traditional Chinese iconography, but also the use of the split screen, slow motion and sudden acceleration, making the performance of the fluid history and shipped.
The joining of forces behind the camera, where we find once again the Korean Jennifer Yuh now supported by the Italian Alessandro Carloni, artistic supervisor of the entire triad (and the Dragon), is a yin and yang combination, a harmonious fusion of aesthetic (and ethical) Eastern and Western spectacular techniques.
Production there as always Guillermo Del Toro, quality assurance and stylistic consistency of the saga. The result is a complex story but accessible, emotionally engaging (see subplot concerns the coexistence of two fathers in the absence of the mother, very topical these days), full of gentle humor and delicate irony. An invitation to self-awareness and self-control that never becomes preachy sermon.