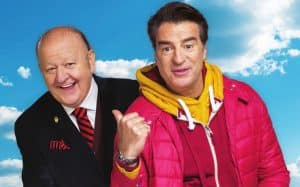 Piero Fumagalli is a “northerner Milan’s fascist secessionist”, marketing director of a multinational company. Remo Ricci said Zotta makes a warehouseman in the same company, has a child on the way, a mother freaked out and a bank account perpetually broke. Both manage to win the coveted trip offered as a prize by the multinational to travel to Prague to attend the final of the Champions League, on one condition: that will bring a picture of the Champions League from the game. So begins a picaresque trip to Planes, Trains and Automobiles because our heroes, initially emergency landed in Slovenia, Europe will have to cross the northeast towards Prague, and supporting one another in the name of the common goal.
Giulio Base wrote and directed this farce on the road starring the comic duo Massimo Boldi-Max Tortora, but as directed, agile and fun, can keep up and give enough space to the two main players so that they can improvise, writing it is weak both in dialogues and jokes, so it is evaluating Zotta ( ” ‘These pieces not even in elementary school I made”) them, as in plot twists, a jumble of improbable comic situations and scollacciate that occasionally make laugh, but never Quagliano into a cohesive narrative and consequently, much less in a comic quell’escalation that every movie of this kind should build.
Especially sorry for the wasted talent of Max Tortora, who the comic and the dramatic strings and why for years we hope to play a role Gassman to sink his teeth. His timing is perfect, his physicality gaglioffa lends itself well to the Italian comedy, and Tortora possesses the rare gift to go from tears to laughter (and vice versa) with great fluidity, giving bitterness and sadness behind his mask dude nostrano . The character of Zotta, if it was written with more care, would be very effective: poor Roman christ claiming its patina of culture and regret too many dreams every day left in the drawer, “Che Guevara of Torpignattara” whose idea of ​​expropriation the proletarian is to bring his wife to have sex in the bed of his company’s marketing director.
Much more obvious speck of cumenda embodied by Massimo Boldi, unbeatable in terms of comic timing but still tied to heavy and silly jokes like the pun “mystifies / mystifies”. Boldi is that Tortora are “good people, you see,” and deserve better film opportunities.