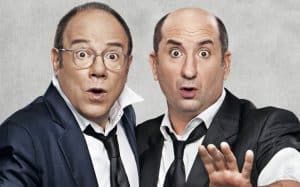 Arturo is a private investigator so shabby to chase the cats escaped from people’s homes and live at an old aunt with her late husband’s myth. Yuri is a theater actor who, since his wife left him, no longer remembers the jokes: So are unemployed and penniless. The streets of Arturo and Yuri are encountered when the actor asked private investigator to stalk him for his ex-wife and her new companion. But when the two macapitati, instead of recording a conversation between the two lovers, cut an ambiguous and misleading dialogue things get tangled and it triggers a game of misunderstandings that will force the “odd couple” Arturo-Yuri in incredible adventures and improbable disguises.
Carlo Verdone embarks on this new project, which he directed, starred in and wrote together with Pasquale Plastino and the new entry (for a film Verdone) Massimo Gaudioso, making sure the comedy stems more from situations that from the two leading actors ability to create gags and comic improvisations. It would be a good idea, if there was not some sort of a formal defect: Verdone and Albanian, physically, are very similar (starting with the fact that both “do not use the hair dryer from 1982”), and the script would have to extensively leverage on this similarity to create a mirror relationship between two opposite, in which one was the dark side of the other. Instead the humor of the two, with some regional variation, is uniformly marked by the same vein maliconica (understandable since the music that accompanies the opening credits) and the construction of the two characters is not quite polarized, nor quite comparable: the two are neither antonyms, nor identical (although declined differently).
Even the profession of Yuri is not sufficiently used for comedic purposes: one would expect that Yuri is rushing headlong into incarnations that the misunderstanding from time to time requires, however Arturo is the most fireworks and ready to improvise. The result is that Verdone, here in great comic form, looms of Albanian, which ends up looking like the shoulder of the Roman comedy. And Verdone shoulder in the movie have it already, much more effective: the Juno Lena, played by the Armenian opera singer Anna Kasyan, real discovery of the movie. Kasyan has impeccable timing, an exuberance and an instinctive physical comedy that inevitably overwhelm Arturo-Carlo, happy to let investment, or to oppose the flood of the woman his best charlatan and his best neurotic. The plot is fun but it never reaches the comic snowball effect that a farce, as it should be this, it needs to break through, and merely make us smile for Arturo reminiscent of Borotalco Sergio (that of the “cargo flying the Liberian flag “) or at Yuri asking” scusissima “at all.
Only in the last twenty minutes, the film becomes one that could have been: a sad satire and much of today’s politics, in which the good people move with increasing difficulty. Agonizing (and ficcantissimo) the list of things that Yuri and Arturo would do if they had a little ‘more money, bitter their final revenge on the world cynicism, that world where most people have never seen a piece of 500 euro, so that those who handle hundreds have free rein to scrub all the others.