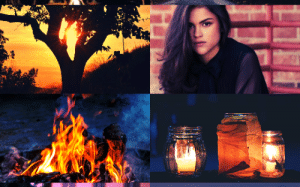 Alejandra Mortiz comes from a family of witches and for a long time has tried to hide his powers. After many doubts he decided to refuse his fate to become a witch and make a spell to himself so he would lose his powers forever. Something goes wrong and the result is that his family is being banished and forced to retreat to the underground world of Los Lagos. Alejandra and her best friend Rishi decide to embark on a trip to save her family, using the magical powers she had refused until then.