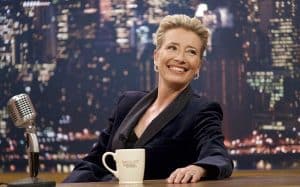 Late-night TV is dominated by men, but in” late-night ” Kaling imagines a world in which the king is actually a queen. Newbury has hosted this show for 30 years. Her office is lined up with the Emmys. She refused to compromise her standards and rejected social media, viral videos . She is British, so the accusations of being “elitist” do not bother her at all. But her assessments bother her. Katherine’s written staff consists of men. She never got to know them and many of them never met her again. The network president (Amy Ryan) wants to replace Katherine with a Dane-Cook guy (Ike Barinholtz). In a panic, Katherine-known for not liking women-orders Brad to hire a woman.
When Molly goes into the writer’s room, no one wants her there. There’s not even a chair for her and she has to sit on an overturned trash can. Reid Scott plays Tom, who reminds everyone he writes Katherine’s monologues. The only guy who is somewhat open to Molly is Charlie (Hugh Dancy). Kaling made some interesting choices in the way she positioned Molly. Before obtaining a writing work, Molly worked in Quality Control in a” chemical factory”.