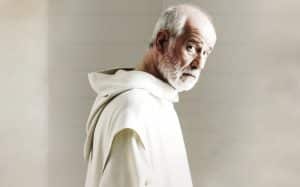 In a luxury resort at the edge of a body of water the eight economic ministers of the major powers staying waiting for the summit that will decide the future of the Western world. The forum is chaired by Daniel Roché, director of the International Monetary Fund, which has also invited three guests strangers to the world of economics: a best-selling children’s writer, a rock star and a monaco, Roberto Salus. Roché asks Salus to hear his confession, and soon after was found dead. For ministers decisions become three: if the death is a suicide or a murder, how to communicate it to the public, and whether we should continue with the maneuver that the ministers were to launch during the summit.
After the success of live freedom, Roberto went addresses the political and economic habitat by placing his characters in the center of the scene, but also forcing them into a sort of divided into niches observation laboratory. The eight ministers form the pantheon of Western modernity, and how the gods of Olympus are fallible and flaky, so their decisions often have disastrous effects on men. When their Zeus fails discover they have neither a guide nor a direction, and everyone begins to react to the presence of monaco bringing to consciousness (it must be said) that doubt which has so far refused to obey the laws the economy and the reason of state, even after the national sovereignty was surrendered to submission to the IMF. We are in the area but also in the frame so Todo De Chirico Il divo: few powerful in a drab space and confined called to deal with the ethical dimension of their role, in a luxury resort and alienating reminiscent of Youth spa hotel, but in where the relationship between trompe l’oeil interior and exterior – which is to say between the inner and outer – also recalls the island’s de residence the Ghost Writer.
The staging tells a metaphysical dimension which on closer inspection does not concern the policy nor the economy, nor religion or art, embodied symbolically by the three foreign guests at the G8: the playing field is ethical and Salus, unlike the Don Gaetano Todo Modo, does not have the Inquisition tones and does not solicit confessions from anyone, but simply collect the disorientation of these powerful nothingness, unable to bring their countries out of the crisis or even to confess publicly his inadequacy. Salus is a litmus test of doubt and remorse of all, and the characters, no more or less of the places you pass through, into and out of oneself in a continuous game of overlapping and subsequent misalignment between (intake) and recurrence of consciousness a pre-packaged role by history.
The director went is sharp and squared, tells an inert world even in an emergency, moves his pawns in a suspended time that becomes immaterial because no “soul variable” but why not claimable even by those who put up the clocks mark the rhythm of life of the rest of the world. Salus, who was discharged from the material universe and its (alleged) mathematical encoding, becomes with the death of the Roché “farewell letter” of the head of the gods: a letter from not open, preventing the “cry of ‘ soul “which is all denominations his outburst. From a cinematic point of view, the inaction that went tells slows the luminous and poetic narrative: who knows if the average viewer will synchronize its internal time that expanded the story told.
The cast of The Confessions follows the metaphysical vision and astonishment of its director: Toni Servillo is a moral catalyst passive and cryptic, Pierfrancesco Favino an acting minister from his role and condemned to be a stranger to himself. No verbal exchange is spontaneous because every sentence is a will, or a confession. But these gods condemned to govern the chaos there is an acquittal, only the opportunity to make an acknowledgment of their intrinsic shortcoming.