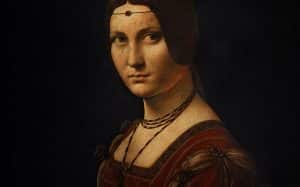 As of the exhibition dedicated to him at the Palazzo Reale in Milan while he was going on the Expo’s documentary traces the Leonardo Da Vinci’s activities in the period when he was in the city during the rule of Ludovico il Moro. This allows you to place some of his works in the cultural and social context of the era in which they were conceived.
It is never easy to ‘tell’ an artist catching him in a phase of his life without becoming didactic wordy or romance end in itself that increasingly characterizes some pseudo documentaries which happen to see on some television networks. The company seems to be even more difficult when the entity at issue is a ‘genius’ to 360 ° as was Leonardo on whose life and whose works, in addition to everything, it persists even today in some cases an aura of mystery. This documentary has managed to overcome the earning field test the nickname of ‘teaching’ relieved of any value that is not positive. Since the presence of the experts who often, in similar products, there are more to pontificate (at a time when the Pope himself not pontificates more) that to do ‘get’ the viewer really in the spirit of the time when the proposed works they were conceived.
Here, from the curator of the exhibition Pietro Marani, everyone gets the opportunity to help understand an open personality whose works are in their turn ‘open’ to the future and to the reading of the beholder as pointed out by Vittorio Sgarbi. The presence of Leonardo in Milan was announced by his own presentation at Moro in which spells out all the arts and techniques in which it is paid. The works, from the first of which follows the journey from Paris to the Royal Palace, are not only displayed and analyzed but revived thanks to witnesses from the past come back to tell us how those frameworks or those drawing were born from the boundless desire for research of genius but also by the needs of less vanity or social recognition of the buyers.
Here then Lodovico il Moro talks about how Leonardo has not completed some of the projects entrusted to them but also how he beautifully portrait his favorite, while just one of them, Cecilia Gallerani, reveals to us what were your reactions before the own portrait. The Leonardo overlooking Piazza della Scala, with the monument surrounded by students, so down from the pedestal to return to what it once was: an extraordinary man, a researcher in human anatomy sought the architecture, but also a human being with friends and enemies, including by some and underestimated by others.
Only in the documentary it comes from display cases managing to find out who looks (especially young) is not an icon but a notional precisely a man albeit with exceptional quality, able to live his time but also to go further. The high school teachers (and not only them) would do well to promote their vision.