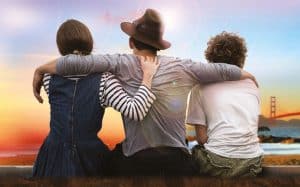 Summer of 18 years. Marco leaves for the United States but the friend that has been hosted in San Francisco offers the same opportunity to Mary, a kind of lay nun eighteen that Mark sees it as a tremendous assumption. In San Francisco await them Matt and Paul: a gay couple, to the bewilderment of the bigoted Mary. Despite the conditions, between the four boys it will establish a partnership that will have the warm colors of summer and the eternal taste of certain seemingly endless youth holiday.
Summer on him is a quintessentially film “mucciniano”: there are overhead in, the dialogues shouted, anger and euphoria, attractive bodies, under 30 affluent, Roman accents, the 360 ​​° panoramic, cliches ( “Everything was so perfectly imperfect”). But here there is a motivation for the tone consistently over the top which Muccino has accustomed us time, and the summer exaggerated emotions that the director sticks there on the skin, creating the right atmosphere for the story it tells, and generating a thrill of nostalgia for youth as a state of being through four characters while “muccinianamente” far away from us, or how we were.
A Muccino has never lacked the directing agility, and in the summer wearing sneaks everywhere, ranking among his characters, fell in love shot by shot, as well as falls in love with the places that says: the Frisco liberals, the New Orleans jazz , the sensual Cuba. It is not a revolution, nor for the protagonists of the film nor the director, who says the thrill of temporary freedom, but is well aware of the need for everyone to fall into line. But for the audience it is intended, that generation often frustrated in its ambitions, paralyzed in the drive, intimidated by a world that excludes them, especially in this Italian so little country for young people, can be a stimulus to caring constraints and imagine omnipotent. In this sense (and risking heresy) Summer is comparable to him Everyone wants something: in wanting to return narratively the thrill of a world in which young people can, and should, feel invincible and take as many as possible of crap without paying the consequences with blood.
The weakest link in this exciting construction (meaning “designed to excite”) is the characterization of the character of Mary, that in a very short time is transformed from virgin repressed in messalina hippie. The strength is a soft, enveloping directed that escapes the control production (product placement, for once, is discreet) and runs away, chasing the (own) lost youth.