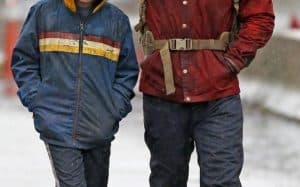 Light of My Life

A father and his only daughter, aged eleven, hide in woods and uninhabited houses, after a virus has exterminated a large part of the female population. The very young Rag is forced to wander continuously and pretend to be a male whenever she cannot avoid contact with other human beings, all men, rendered brutal and unscrupulous by the lack of females.
Casey Affleck debuts in the direction of fiction with a small film, stretched like a rope, which touches on imposing themes without ever exceeding the measure that has been given: an intimate measure but not for this modest.
With the echo in the ears of important precedents, such as The Road or the sons of men, but also of many titles of the sci-fi sub-genre of the contagion, Light of my Life is a disaster movie without the ruins of crumbling palaces, but set between the moral rubble of humanity; a genre film that remains detached from the genre, preferring the freedom of the independent model.
Affleck himself plays a father who also embodies the maternal inheritance, building an umbilical cord made of stories, which he invents for his daughter every evening in a uterus tent. In this camping womb, with the mere instrument of words (all those that he did not say in Manchester by the Sea, come to say) he offers the world and the History he cannot have first hand, reconstructing the foundation myths to adapt them to their universe of two. Great space is given to acting, verbal and non-verbal, and to nature, in an extremely realistic and primordial dimension, made up of instincts and memories, desires and above all fears. Because Rag is growing and with her his problem: the shot in which the positions of the two protagonists are overturned in the usual nest, and the reaffirmation of imminent puberty, which then comes under form of intelligent metaphor.