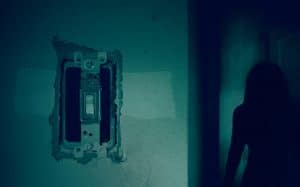 After doing later in Paul’s office she has a close encounter, and fatal, with a mysterious creature that lives in the dark and the light fades in the face. His wife Sophie, the victim of a severe form of depression, as a result it always closes in on itself, reinforcing the link with the mysterious creature, which comes as a friend and called Diana. Meanwhile, little Martin, son of Paul and Sophie, sleeps with the light on, for fear that Diana hurt him.
At the time of the short film, which in 2013 earned David F. Sandberg showered with awards, he was already talking about a new promise for the genre, so much so that James Wan – The Conjuring director – he immediately thought of producing a Sandberg ‘ extension of that short. Given the thinness initial assumption, one can hardly deny Sandberg’s commitment to make Lights Out a feature film. To extend the strong idea of ​​a monster who is acting in the dark, but disappear with the light on (only to reappear as soon as it is turned off), the Swedish director uses every possible trick, including the lighting of electronic devices and low beam headlights and, as for the dark, the exploitation of shadows that are formed in opposite corners of the house with respect to a light source.
The cat and mouse game between the courageous and relentless Diana Rebecca lasts well in different environments and situations until the turn, determined by Rebecca investigations. Ie the discovery, dramatically too easy, of secret testimonies on Diana’s past: the topos on the monster’s origins, echoed by countless predecessors, as Nightmare or Friday the 13th.
Narratively and conceptually very thin, save Lights Out is only the technical side, holding enough to make some throbbing fight sequences between Diana and the children of Sophie. Instead better to postpone the subtext psicoanalatico that looketh The Babadook but found only disturbing coarseness simplifications.