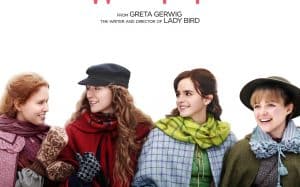 The silhouette of Jo, from behind, looking over a glass, like a mother would look at a newborn baby in a nest. Something will be born beyond that glass: his novel, “Little Women”. Those of Greta Gerwig start from here. The famous “Christmas will not be Christmas without gifts” will come later, in one of the many flashbacks, because this is how the American director chose to structure the story: mixing the novels of the series and combining them with moments from the biography of Louisa May Alcott, but even of his own, because these moments concern being an author and a woman, yesterday and today, in a world of men.

Gerwig gives her own version of “Little Women”, with a precise cut, which highlights the obstacles on the road to female autonomy, the contractual nature of marriage, in particular for women, and in general the social and individual consequences of his lack of economic independence (“married or dead”, insinuates Aunt March, who will not always be right but never wrong).

It is a legitimate, clear and always current vision. Less legitimate and successful is instead the compression of the key episodes of the novel in sketches squeezed and drained of their emotion: where is Beth’s fear of plowing the door of the Lawrence house, mixed with the desire that consumes her to put her fingers on that piano solitary? Where is Amy’s sense of guilt for what she did, in jealousy, to Jo’s manuscript? Even the scene of the accident on the frozen lake is wasted (even turned poorly), not to mention Louis Garrel in the role of Professor Bhaer … (at that point better than the Mark Stanley of the recent BBC miniseries).

But the small women of Greta Gerwig (except Beth, inexplicably faded) have personality and charisma. They have the colors and bronzes of the paintings by Lilly Martin Spencer and Winslow Homer, the way of gait of the Damsels in distress by Whit Stillmann, they are tornado girls who bring chaos, subvert the tradition, and in the long run impose themselves, with their defects , their dubious times (why those slow in the first part? And so much haste, however, where has space always been given to the drama?) and even manage to make us accept the improbable Laurie of Timothée Chalamet and above all the Amy of Florence Pugh, unexpected but surprising, capable of keeping up with the protagonist (the alter ego and muse of the director, Saoirse Ronan).