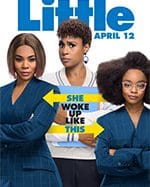 Jordan became very bad because she was bullied and humiliated at school , making the decision to protect herself, becoming worse than anyone else.
Currently, Jordan is a bully. She runs a successful software company, decorated with huge versions of magazines covering her achievements.
The girl Points her wand to Jordan and makes a wish and the next day wakes up inside the school . This gives April the chance to make some changes at the company .
Hall and Martin do their best, but Rae is the more interesting character. Rae makes the most of the comedy and the more careful exploration of the voice.