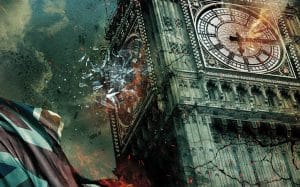 Following an attack by the army drones, the trafficker Aamir Barkawi weapons loses his daughter during the celebration of his wedding. Years later, following the disappearance of the British Prime Minister, the world’s leading authorities, including the President of the United States, are invited to attend the state funeral. The danger of a terrorist attack is very high, but no one expects something similar to what will happen.
After the White House had to touch in a European capital. So who else but the historical ally of the United States, equally detested by the Axis of Evil Islamic terrorism? The moment we learn the news that the British Prime Minister is dead and will follow a funeral ceremony with all the major heads of state present, the audience already knows what awaits him. As well as the indomitable Mike, the CIA agent with a license to kill in the most barbarous possible, starring Gerard Butler. The success, in an unexpected part, to the ability Attack, necessarily have led to a sequel, rendered sadly today from what happened in Paris on November 13. The contiguity with the reality of international politics, however, end here. The Siege 2, even more than the first episode, is basically a science fiction movie, where credibility is banished in favor of a work that has as its sole purpose is to stimulate the hand more intolerant, violent and vindictive of each of us . That the enemies have not substantially a recognizable face and that every act of brutality against them is justified by the circumstances, specially assembled by the script, it is something that can be expected from Babak Najafi film.
Less predictable, however, it is its absolute ineffectiveness as action movie, particularly weak in the twists and sequences that presuppose. It is difficult to understand how they were invested 100 million dollar budgets, given the poverty of means and ideas emerging from many choices put on stage: anonymous interior, without a job on the details that help identify, traps, tricks and gimmicks already seen millions of times. Except for the sequence presidential helicopter, the subject of attention of snipers armed missile launchers, the action sequences show inventiveness electroencephalogram plate and a technical than ever approximate. The opening of hostilities between government and terrorists, for example, which culminates in a shootout in front of a cathedral, is filmed in a single sequence and is free of cuts (perhaps an attempt to emulate the Johnnie To’s Breaking News?), but unintelligible in its frenzy and its iteration of senseless killings. The effect of Die Hard, of incredulity mixed suspension was guilty of excess adrenaline thrill, it clicks: to remain impressed after watching Mike feats are not the agent, but only his contempt for human life, which is manifested by cold-blooded executions, torture, distasteful jokes or sermons with his fists on the eternal role as a defender of freedom that characterizes and characterize America. The cast of actors, relevant on paper – Forster, Freeman, Leo – is totally wasted in a handful of scenes shot in a White House that has never looked so similar to a common office of a public administration of the province.
Wanting to make an effort to search for items of interest, it is found recovery from Spectre of the theme of the bureaucratization of the secret services, and a thin rematch against the same James Bond and the alleged British superiority, made fun of by Islamic terrorists (whose precise provenance does not count at all, so as to be synthesized with a xenophobe agent Mike). For the rest of calm, despite the countless explosions.