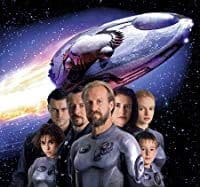 In 2045, the Earth is on the verge of collapse. Overpopulation, pollution, climate change have made the planet very unfriendly. So anyone who can afford it, economically and in terms of curriculum, does the suitcases and leaves. Destination: Alpha Centauri, the new frontier, a colony-paradise where you can start your life from scratch.
The Robinson family, (veteran John, wife aerospace engineer Maureen and sons Judy, Penny and Will), after passing the settler test planned for settlers, embarks on the long journey. But something, once in orbit, goes wrong: the family loses control of the space shuttle, ends up swallowed in a black hole and falls on an unknown planet.
The situation is immediately desperate: the spacecraft, crashing into the ground, got stuck in a glacier; Maureen is wounded; Judy is trapped in a frozen lake; Will, the youngest, has ended up in the hands of a strange creature, between the alien and the robot, whose intentions are unclear. The only positive note: the planet’s atmosphere is compatible with the human being. The air is breathable. And perhaps, at a second glance, the situation is not as tragic as it seems. Will the Robinsons get back on the road to Alpha Centauri? Will they survive on a wild and unknown planet? But above all: will they be able to remain united despite, evidently, they can barely support each other?