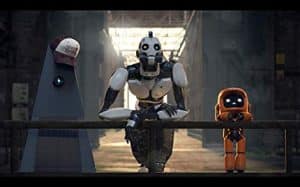 Robots that question the disappearance of man, women who fight misogyny in an arena of monsters, peasants with heavily armed exoskeletons to repel hordes of giant insects, sentient yoghurts, misplaced space missions, waste that comes to life, evolution and involution of an artificial intelligence and a whole universe in a freezer: these are just some of the stories of this anthology of animated shorts.
A showcase for animation studies, with mostly Western artists (including the Italian Gabriele Pennacchioli), who turns out to be little more than a technically excellent showcase but with nothing or almost nothing to say.
Created by Tim Miller, the director of Deadpool and the upcoming Terminator return, and produced by him along with David Fincher, Love Death & Robots is an anthology for adults and Netflix forbids it even at the age of eighteen in its vision advice. The animations are of various techniques and styles like the Animatrix produced by The Wachowskis years ago or more recently the collections of shorts made for the universe of the videogame “Halo”. In this case, however, there is not a single setting to frame and the authors have had the freedom to indulge themselves with the only request of the fantastic, almost always science fiction but in some cases simply horror.
Reading the credits of the episodes we understand that the only element of continuity is the work on the screenplays by Philip Gelatt, who reviewed various stories adapting them for the numerous studies involved. There are short stories by Joe Lansdale, John Scalzi and Marko Kloos, but some stories written by the animators themselves, as in the perhaps more virtuous short: The witness by Alberto Mielgo, already among the main Spider-Man artists: a new universe, from in fact the use of the onomatopoeias is resumed. Here a sort of paradox from recursive time is staged, a loop in which the roles of the protagonists are destined to exchange, all set in Hong Kong and passing through a fetish club with a lot of frontal nudes. In this case, as in others, the “adult” cut is unfortunately rather free, slammed on the screen only because possible, rather than with a real sense within the story.

Moreover, if The Witness plays with the absurd and the enigma, leaving the viewer at least a little upset, on the style of the mythical finals. At the borders of reality, in most other cases the whole narrative is merely functional to the aesthetic display.
Moreover animation is less varied than one would like, short in traditional technique, drawn in short, are few and too many prefer a photorealistic computer graphic, almost as if they were doing a test for the realization of videogame cutscenes (non-interactive sequences) . Even the narration, with fights between monsters, space marines and battles between fighters, often goes in that direction, where the most interesting effort, at least in terms of setting, is in The Secret War, set in Siberia during the World War II with the Red Army called to face a horde of monsters.
Among the most interesting, also for how it reinvents itself in its three chapters despite the short duration (no shorts reach 20 minutes and several are under 10), we find Buona caccia, where we go from a rural Chinese scenario to Hong-Kong Victorian, up to a steampunk populated with automatons. The other courts dare much less in terms of breathing and instead concentrate on just one situation, in some cases with comical intent – as from the title The dominion of yogurt – and in others more dramatic like Giving a hand, which is a kind of variation of Gravity where a woman risks drifting into Earth’s orbit.
Thematically the environmental message and the emancipation of women emerge here and there, especially at the center of the first episode The advantage of Sonnie, but the action ends in itself, in some cases with a great rhythm like in Punto blind or for the less with a good flying scene as in Dolci thirteen. There is also a lot of space for irony, where the most original result, also for the mix of live action and animation, is the short directed by Tim Miller: The Ice Age. It is the strange story of a couple, played by Topher Grace and Mary Elizabeth Winstead, who finds a mini mammoth in an ice cube in the home freezer and then, freeing the freezer, observes the evolution of humanity, which passes in a few hours from the industrial era to atomic war, up to space travel. We obviously do not tell the ending, but the oddity and the cast are worth the time of the vision, while on the contrary the more philosophically ambitious short, Zina Blue, after a departure with reflections on art resolves itself into a banal return to the maternal womb.