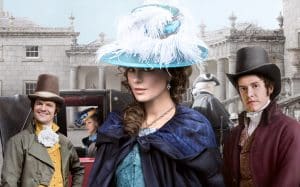 Langford, UK, late eighteenth century. Lady Susan was widowed by the sudden death of her husband. He then leaves the residence of Langford together with Frederica daughter to settle in Churchill, relatives of the deceased spouse. The sister Catherine strongly Lady Susan formal notice, but it seems not to be able anything against the scheme of the charming widow, who intends to seduce the brother of Catherine, Reginald, and marry off his daughter with the rich but stupid Sir James Martin.
A project for some time Whit Stillman has tried to achieve without success and finally takes shape, love and deception can be both a respectful adaptation of Jane Austen and its upheaval. Starting from the title, Lady Susan in the original text, which becomes a pairing of abstract nouns in the style of Jane Austen: Pride and Prejudice as to Love and Friendship (so reads the title, for the Italian output transformed into love, and deceit ). Lady Susan is a little novel posthumously Austen wrote at the beginning of the career, but probably ended hastily, using the epistolary form. Stillman takes some liberties – in addition to the title, the shape of the narrative – to realize what Austen could have or perhaps wanted to do, but even more to infuse large doses of corrosive cynicism austeniani dialogues.
The Hybrid succeeds in charming manner. Visually we are seeing a meticulous reconstruction of rooms and clothes, as advocated in the film canon in costume, and the geometric perfection shots that frame the characters during their talk. But closing your eyes you can enjoy the brilliance of a screenplay that if maintains the shape of the milieu austeniano, it also shows awareness of social rules imposed by contemporaneity. Lady Susan – manipulator of emotions and destinies that we learn to admire and love, instead of hating, as it will deepen the knowledge – sees everything in terms of its public image, it can shine even when not assisted by reputation. If the latter is for Susan hopelessly compromised by rumors, playing with before the widow still managed to get what he wants. “The facts are something horrible,” says the star when one of his conspiracy comes to light: Fortunately for Susan who, in eighteenth century, as well as in the twenty-first, the manipulation of the facts always end up having the better of the truthfulness of the same.
Extraordinary Kate Beckinsale finally starred in a production at its height after years of Underworld and Van Helsing. Chloe Sevigny – here Alicia, only trusted friend Lady Susan – back to form the combination that was the Last Days of Disco, the film of the same Stillman projected that the two actresses in the empyrean of the stars. But notable are all characterizations (introduced with a deliberately didactic style, accompanied by the use of techniques such as the iris), from the fleeting appearance of Stephen Fry, who just two stops to enchant.