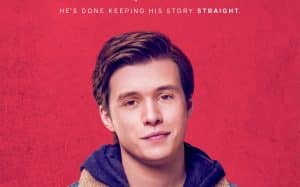 Seventeen-year-old Simon Spier has a normal life, a family that adores and extraordinary friends but keeps a secret: nobody knows he is gay. Simon does not even have the courage to tell the family until an exciting exchange of emails begins with a classmate who remains anonymous. When his secret risks to be revealed, Simon’s life becomes an adventure in which the smile alternates with worry.
Greg Berlanti avails himself this time of a very effective screenplay written by Elizabeth Berger with Isaac Aptaker based on the novel by Becky Albertalli “Simon vs. the Homo Sapiens Agenda” (translated in Italian with the title “I do not know who you are but I am here “).
However, we feel from the first shots that there is not only a good script behind the success of the film but also a lucid and empathetic participation in the subject.
In fact, it is not necessary that too many minutes pass because the viewer adheres to the torments of adolescence, but precisely for this reason, of Simon who has a beautiful, classic family made in the USA with a father who takes good care of manhood. How can ‘disappoint’ it? But, above all, what to do when the school nerd blackmails you, having discovered your emails with an unknown gay keyboard friend, pretending that you open the way towards what for you is a friend and for him the girl of dreams? Berlanti manages to tell lightly, without rhetorical accents but also with features of profound humanity, the inner conflicts of a boy who is forced to hide his sexual tendency because Homo Sapiens has not yet worked out codes of non-tolerance (term abused but treacherous) but more simply than civil cohabitation.
What then makes the plot even more lively are the protagonist’s friends, each with his loving and / or familiar punishment in search of a solution. As often happens (unfortunately also in reality) parents or there are, or do formal checks or laugh and joke but do not notice what goes on in the minds and hearts of children. It is not easy to bring all these elements to the screen without slipping into the drama or thesis film. The balance between the elements is revealed as the dowry of the prime of Berlanti who, even when he has a character that exceeds, knows how to reinsert it quickly in the tracks of credibility.