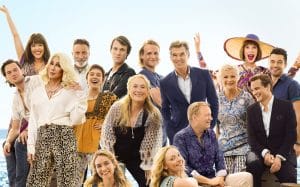 A few years have passed and Sophie decided to modernize the family hotel on the Greek island of Kalokairi to pay tribute to Donna, who raised her alone in that earthly paradise. While suffering from the distance of Sky and is working to make the hotel’s opening memorable, the young woman thinks back to her mother’s life, to the handful of days that shook her life and the choice to stay on the island, the that she is maturing, amid enthusiasm and perplexity.

The sequel to the colossal success directed by Phyllida Lloyd is based on the formula of mirroring, followed with stubborn exactness, not to say mechanical robotics, and culminating in a person exchange in a watery reflection, to seal the long equation that precedes it.
The director, ten years later, passes to Ol Parker, and, even if at the base there is no longer the direct inspiration of a musical already tested, it seems that the script of the film is born from the desire to stage many songs ABBA who had not found a place in the first place. The music is so much, even too much, in fact the solution of continuity between the pieces sung is often minimal. On the other hand you sing and dance in and out of flashbacks, with the difference that, where the character played by Amanda Seyfried cries melancholy tears, Lili James’ entry into the role of Donna da ragazza is an endless wild laugh, a symptom of a love for life and adventure that has always been the successful ingredient of music and character.
The part of the memories is in any case the most successful and the most fun, so as to relegate that of Sophie and the three fathers to the role of frame, and marks the entry into scene of three characters that are unexpectedly up to their future – and much more noticeably. For the rest, the sequel tries to make up for the repetitive identity manifestations that characterize it with a leap in size, focusing on large choral numbers, which break through the barrier between inside and outside (“When I kissed the teacher”, “Waterloo”) .