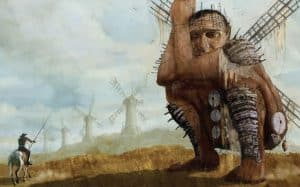 The Man Who Killed Don Quixote

Toby is a commercial director who is going through Spain for the shoot. During the journey he encounters a student who gives him a copy of the first film Toby realized that while he was still a student: a version of the story of Don Quixote set in an ancient and quaint Spanish village. Toby moved aside to a strange journey in search of the small village where he had filmed the movie. But soon she finds herself embroiled in a series of disasters.