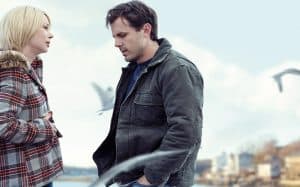 Manchester by the Sea

Lee Chandler leads a lonely life in a basement in Boston, tormented by his tragic past. When his brother Joe dies, he is forced to return to the native town on the coast, and finds he has been appointed guardian of his nephew Patrick, Joe’s teenage son. While trying to figure out what to do with him, and deals with burial practices, comes into contact with his former wife Randy and with the old community he fled. Removing the memory of tragedy becomes more and more difficult.
Set on the northern coast of Massachusetts, where nature has the best of man, the amplitude and depth of its waters and the hospitality and stiffness of its winter temperatures, Manchester by the sea is the dramatic backhand of You Can count on me: Lonergan has become hard and mature, without losing tenderness.
No more melancholy, but the greatest tragedy, irreparable destiny, and the life that, stubbornly, still requires to be lived through Patrick’s youth and her hunger for experience, human warmth, which crush the drama ice as Small cracks in the form of a smile.