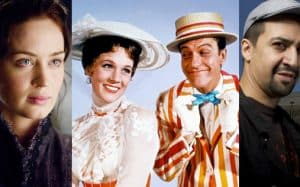 Given: It’s always Walt Disney’s time, for nearly a century. London is organizing the production of Mary Poppins Returns, the film remake of 1965. A brief retrospective is indispensable. First assumption: we are all children of Walt Disney. The genius and strength of his inventions have profoundly affected the character, the sentimental and cultural formation, and also the aesthetics of many generations. The models were always positive and benevolent, reassuring and useful. We need a Treccani for an analysis, I’m limited to the vertices, all well in our memory. Some names and an exemplary title: the wise and positive Mickey Mouse, the cute Paperboy, and then all those animals that effectively transmitted human feelings.
A heroic title: Snow White and the Seven Dwarves, who in 1937 helped a country, America, and reflected the world at the time of great depression.
Puppy and comrades dig diamonds, already cut and big like apples. They lock them in a cabin and hang the key out of the door. And they live in all modesty. Stunning metaphors therefore: It is more important than having, and then that key that represents the reserve, the confidence that will be solved and the well-being that is there behind the corner enclosed in a cabin.
There is no more powerful training story
And all of a long, phantasmagoric, “unique” journey, to get to Mary Poppins, carriers of even more general and profound meanings. I expose myself: I do not think there is a more powerful training story of this. To begin with, it is worth repeating the film’s happening year after year, Christmas after Christmas. And if by chance it jumps that recurrence if it feels lacking. And I just do not think there is only one parent who is opposed to that story. Training Work: Mary is a perfect set-up for the kids – Jane and Micheal in the movie and all that the movie sees – teach fun; there is the stern father who slowly turns to the rules of Poppins; there is the fanciful fancy and magic sweater; the mother (almost) feminist. There is no indication of money, which may also be missing … but then remedied. And then the songs, almost all classics.