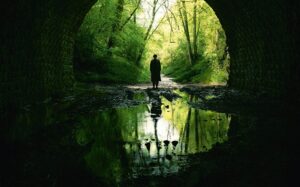 After having communicated to him the desire to divorce, leading to a violent marital altercation, Harper witnesses the death of her husband, James, without knowing whether it is a suicide, as he threatens, or a fatality. The guilt and obsession with causing her tragedy lead Harper to seclude himself in a mansion in the English countryside of Gloucestershire. Here she makes the acquaintance of Geoffrey, her eccentric landlord, and later a series of individuals of growing and disturbing bizarre, all with the same face as Geoffrey.
One could think of an adaptation, in the form of a horror allegory, of the typical stereotype that reads “after all men are all the same”. Because apparently Alex Garland in Men this stages, using only one actor, Rory Kinnear, to represent six different characters and as many masks of toxic masculinity: from an inopportune shepherd to a silent stalker, passing through a policeman and an eccentric master of home.
After the provocation of Ex Machina’s sexy artificial intelligences and the enigmatic science fiction of Annihilation, Garland adapts a well-established suspense technique to the story of Men as well.
The visual effects and photography insist on the use of bright colors – in particular the bright green of the Cotswolds hills – to increase the atmosphere of disturbing unreality of the situations in which Harper finds himself, or a succession of frightening events that correspond to as many symbolisms , to hide the trauma suffered and the consequences thereof.
The interpretation is left to the viewer and is once again free, it could be a hallucination of the protagonist Harper, as well as an actual journey into the nightmare of a haunted village. But the answer is of little importance. The supernatural device, which uses fascinating locations, including a church full of pagan symbols, is the device used to embody Harper’s sense of guilt and to perpetuate the persecution of her deceased husband, even more violent in his victimization attitude. and passive-aggressive than in corporal abuse.
There is no solution for the atavistic worm of misogyny, Garland seems to say. Even today, in a world that has forcefully exposed its misdeeds, male chauvinism uses more subtle but equally effective techniques to maintain oppressive control over the feminine.
There are many references in this sense to Greek mythology – Leda and the swan, the sirens and Ulysses – and to horror literature, starting from the references to the Gothic tradition of Arthur Machen of “The great god Pan”, in which the moors English hide an undergrowth of lewd and perverse ancestral demons.