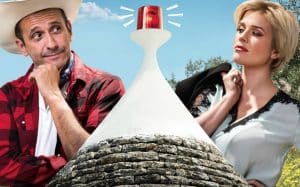 Michele Modugno is Puglia mason famous for being an incurable Don Giovanni. Constantly late with the mortgage payments, he and his sister are forced to rent the family trullo an elderly lady Northern to settle a big debt that otherwise runs the risk of damaging them. An unforeseen forces the woman to cancel the start and, in its place, Michael is surprised by the arrival of a beautiful young girl from Milan, Jade, accustomed to the aperitif – “bee” to his friends – and to anglicisms. The differences between the two are immediately apparent and misunderstandings soon turn into irresistible desire, hampered by a loving godmother of Michael so ours is forced to pose as a Franciscan. In all this while the family trullo is literally stolen, and the beautiful Milan will be forced to stay in the house / trullo that the protagonist shares with his elderly mother.
In an Apulian village in the hinterland, the classic story of the country boy in love with a woman accustomed to worldly environments finds its originality in the yellow of the disappearance of the typical construction of the conical roof, dismantled piece by piece and destined to adorn the villa away a wealthy businessman.
Against the background of Puglia postcard, mix contradictory elements that represent each character in its specificity: a commissioner grappling with a strange method to quit smoking; a priest can gather first the mood of the villagers; tourists a bit ‘surface in search of leisure and business not really legitimate. Trait d’union between personal vicissitudes that populate the charming village is the investigation on unconventional theft of ancient bricks, around which brings together a number of high character actors in paradigmatic symbol of Italy throughout.
Gennaro Uccio De Santis falls perfectly into the role of the caricature country boy from strongly marked dialect, tireless in idyllic dream of a future in America. Nevertheless, the impression is of brilliant theatrical lent to the cinema, which squirms trying in vain to create a visual imagination, to trip, alas, grotesque abuse of speech. In fact, among the commonplaces of paroxysmal attitudes, which seeks to undermine the stereotype, the film finds a strong comic verve only when writing focuses on the passages in which the action takes place, leaving the gag from variety of television matrix.
With a sharp message of national unity, the Vito Cea film tries to revive the successful genre of comedy made-in-the south, where sin of self Miniero (Welcome to the South) ironically played on regional clichés. Attention to extreme characterization of the protagonists is a double-edged weapon that threatens to penalize the narrative balance, with the core of the narrative comedy rose up to three good quarters of the film. Despite the classical directorial approach, little accustomed to technical and linguistic virtuosity, the genuine simplicity of intent will expire in a few peremptory statement that appears as a mechanical exchange of words already heard – I present THE Giampy and LA Roby-, predictable traits. The only true revelation of a work still enjoyable, is the town of Cisternino, the perimeter within which the director, with no claim to authorship, discovers the wonders of the Itria Valley with a Milanese “liquid” in a hilarious journey looking for new roots.