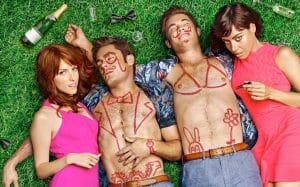 The Mike and Dave parents are taking care of the sister of the two who is getting married in a ceremony in Hawaii. Their concern is that the two children repeat businesses that are their regulars. That they tend to spoil any family reunion exaggerating in jokes and vulgarity. It is then forced them to be two escorts who are the good girls and thus induce them to behave well. The two, who do not have friends like that, put an ad in the newspaper and receive numerous nominations. Choose two girls that seem to correspond to what is required. They only seem, because it will eventually turn out to be the most embarrassing of them.
Seeing a movie like that directed (?) By Jake Szymanski who is in his first (and hopefully last) feature one wonders why there are actors who disperse their gifts of stories like these. Here, in particular, is thought to Zac Efron (who on this slope had already presented) and Anna Kendrick that are having to serve a screenplay that lost opportunity that reality had made available. Because the story is partly really happened to two brothers who published February 13, 2013 an announcement on “Craigslist” to find two escorts in a wedding and received thousands of responses.
The problem is that here we are limited to using the cue for ringed situations where both men and women are grotesque but without there being a real stylistic choice in the matter and which proposes a relationship between the sexes that is told as in the worst films for teenagers who would like to forget about the pimples and love stories in which the characters are constantly over the top.
The only positive note is the fact that the two actresses (Kendrick and Plaza) know each other well being friends and having already worked together so they can support each effectively. The same can not be said of the two males, in particular as regards Adam Devine.