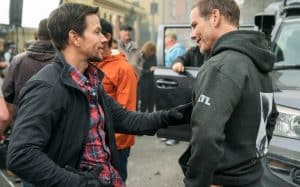 Jimmy Silva is a US intelligence agent with a rabies control problem. When he and his team are hunting for a consignment of radioactive cesium in Southeast Asia, Li Noor is handed over to them, willing to hand over cesium in exchange for political asylum.

The binomial Berg-Wahlberg arrives at the fourth film made together and the question, as and more than in previous cases, becomes ethical-political. To what extent is it possible to disregard a disturbing point of view such as the one adopted?
It is undoubtedly unusual to witness an explicit celebration of the invasive capacity of cameras placed anywhere or the destructive potential of drones, when used to detonate a hostile target. But the fact that they are unusual points of view does not make them more acceptable. The problem is that, while trying to analyze Red Zone – 22 miles of fire remaining impartial, while trying to accept the logic of the hard and pure action movie, with its rules and its priorities, the ease of Peter Berg often leads script beyond intelligibility.
You wait until the epilogue to better understand the story and who moves the threads, but it is as if there were no hooks between the different segments of the film: it is not a question of minimizing explanations on plots and motives, it seems more disinterested in make events understandable (except to get a pretentious explanation after 30 minutes of film, in which the character of John Malkovich summarizes what happened up there).