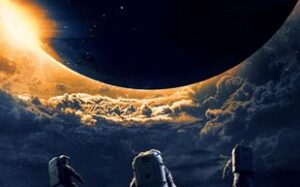 During a space mission, a cloud of black, threatening nanoparticles rises from the moon and attacks three astronauts. On earth, an investigation and a trial follow that prematurely dismiss Commander Bryan Harper, who survived the mysterious accident with his colleague Jocinda Flower. For his superiors, Harper made a mistake that cost the life of a crew member. Ten years, a divorce and several bottles later, he is called to arms to save the Earth. Because the Moon is falling, NASA is confused and the US military has a stupid and atomic idea. It will be up to the two old colleagues to resume the route and discover the mystery. He helps them in the enterprise KC Houseman, conspiracy podacster convinced that the cause of the disaster is an extraterrestrial entity nestled in the heart of the star. All that remains is to turn on the launch pad and check on the (lunar) field.
For twenty-five years Roland Emmerich has wanted the moon. Independence Day, Godzilla, The Day After Tomorrow, 2012 . our lord of the apocalypse does not resign himself to the impossible. Destroying the Earth is his obsession, crashing the moon to make it happen is his last mission.
The debut is promising: the Moon leaves its orbit and crashes into our planet. Fans of the director know the sequel: massive destruction, regressive pleasure and abysmal fun, often claimed. It is his business card, the promise that the viewer comes to fulfill with his hands in the popcorn.
The Hollywood bulldozer does not disappoint and respects the contract, guaranteeing the disastrous spectacle, in every sense, of an apocalyptic appointment between Earth and the Moon. The ticket is worth the delusion that in the last act sacks 2001, Mission to Mars, Prometheus, Stargate, plunging Moonfall into the realm of raving science fiction. Emmerich explains the true nature of the Moon and rewrites the history of humanity in spite of cinematic common sense.
Divided into two narrative arcs, one on the ground and in tow a band of survivors fleeing the impending catastrophe, and another in zero gravity with playmobil pilots improvising a galactic odyssey metaphysics, Emmerich’s new disaster-movie is too weak on the ground and too absurd in the air.
The combination of the two trajectories never really works and marries a disturbing thesis and resonates with the times of worrying distrust of the scientific community. In fact, the real hero of the film is KC, an expert on “megastructures” who claims that the moon is an alien artifact, despite NASA scientists. Those in good faith, at least, because the corrupt ones hide in the darkness of the archives with a secret: “the moon is the biggest lie in history”. After all Emmerich is a regular visitor to pseudoscientific subjects: in Stargate it is the aliens who have built the pyramids, in 2012 the para-archeology becomes synonymous with apocalypse confirming the reliability of the Mayan calendar, in Anonymous William Shakespeare is not the author of his plays but the figurehead of an aristocrat whose rank prevents him from writing for the theater.