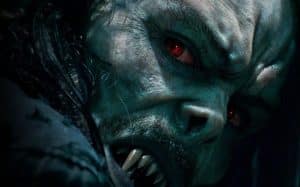 Brilliant biologist, Michael Morbius is tormented by a very rare degenerative blood disease that gets worse and worse and threatens to bring him to death in a short time. Convinced that only biology could draw a cure for his condition, Michael decides to try everything to heal and submit to a reckless vampiric contamination with bats. Contact with bats in some way actually heals its pathology but also has totally unexpected consequences on its biological structure. Morbius becomes a being halfway between the human and the vampire, prey to an uncontrollable desire for blood – which becomes his only food – but also of the constant fear of being able to cause pain and suffering for other people and obviously from guilt for what he does when he is hungry for blood.
Sony continues with Morbius its cycle of twilight cine-comics that tell the story of some of the less famous faces of the endless cast of superheroes referring to the world of the Avengers and, thanks to the agreement with Disney in September 2019, now also these titles they are part of the continuity of the Marvel Cinematic Universe.
The film tells the story of one of Spider-Man’s and Blade’s lesser-known enemies – remember the film trilogy at the turn of the late 90s and early 2000s with Wesley Snipes? – as well as one of the probably most ambiguous and tormented Marvel characters, despite the House of Ideas boasting excellent credentials on the subject (and the Venom with Tom Hardy also proved it).
First and super-human genius researcher devastated by the sense of guilt, by the fear of what he could do and by the urge for human blood then, Morbius takes the depths of darkness even more deeply that Venom had already partly touched.
As the main character, the suffering and obscure biologist of Greek origin Michael Morbius, there is Jared Leto who, after the sad sinking of his version of Joker in Suicide Squad, “changes team” and goes from the narrative universe of DC Comics to that of Marvel. At his side we find Matt Smith, Adria Arjona in the main female role, the character Jared Harris and the column of the Fast & Furious Tyrese Gibson saga, as Michael Keaton also briefly appears in the film, again in the role of Adrian Toomes / the Vulture , enemy of Spider-Man known in Spider-Man: Homecoming.