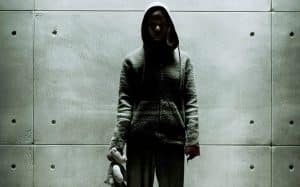 Dr. Kathy Grieff, after telling her she has not been able to convince her to get her out, is attacked by Morgan, a girl locked in a security room – only the intervention of other doctors interrupts the assault. The Lee Weathers risk assessment expert is commissioned by the company’s owner of the facility where Morgan is locked in to locate the site and assess the situation. Morgan, in fact, has been artificially created from synthetic DNA and is growing fast: it is five years old and yet it is already large. Only he is also developing emotions. Arriving at the scene, Lee examines an assault movie. Morgan has always been followed by Amy Menser, a specialist who deals with her behavior. Other members of the research team are Dr. Simon Ziegler and nutritionist Skip Vronsky. Lee’s job is to verify that everything was done as planned and that no one made any mistakes. Of course, Lee also talks with Kathy, looking after the aggression. Kathy feels guilty, she thinks she has caused Morgan, without wanting to. Lee, cold and professional, does not appreciate that a “thing” like Morgan is so personalized. Ziegler explains to Lee that Morgan was created after several failures: he is convinced that even that terrible accident could teach something to keep the project going in the right direction. Lee also meets Morgan, who is sorry to have hurt Kathy. Lee’s horizon also includes Dr. Lui Cheng, an important part of the project. As Lee tries to figure out what is right to do, Morgan’s personality interlacing becomes worse. Not without consequences.
From Frankenstein onwards the artificial creation of life has often been at the center of horror (or fantahorror, as in this case). And even without the inconvenience of Frankenstein (which is still the origin, undoubtedly), the theme recalls recent examples (Splice of Vincenzo Natali) or more remote (Embryo by Ralph Nelson), from which the film takes several insights. Cruelty has always been the unconsciousness of the “monster” or, more so, its “innocence” with respect to the coming into the world, in a reflection on the essence of human nature and its artificial replication. The long interview between the psychologist Paul Giamatti and Morgan, who is at the central stage of the film, highlights these aspects, comparing Morgan’s wounded and deadly fragility with the over-human-sense of superiority and manipulation of the psychologist.
The philosophical issues at the base of the film are presented with accuracy, but at the time of the dramatic rationem tend to be discolored in the face of events and different motivations of the characters, which depend not so much on reasoning as on their psychology. In the end, then, by their greater or lesser “humanity”. And that same “humanity”, somewhat slipped into Morgan, makes it so dangerous. After the first two thirds of the preparation, in the last third, the film moves to the action, dispersing a little bit the plumbean and oppressive atmosphere carefully built (and raised moral questions) to stage well-executed fights and pursuits that lead Yet to an effective final shot.
Convincing director’s lead for Luke Scott, Ridley’s son, does not beat new roads and does not provide innovative variations, but tackles the subject with solid narrative skills and good eye for suggestive visual solutions (the final in the forest is a good example). In a remarkable cast, the legendary Michelle Yeoh of many martial arts films (and not only) is happily reviewed. In small roles also Jennifer Jason Leigh and Brian Cox (the first Hannibal Lecter film). Mom Taylor-Joy, a recent great actress of The Witch, replicates convincing proof with a sensitive and faceted portrait of a being predestined to suffering. Mark Patten’s pervasive and evocative music, which helps to create a suspicious and disturbing atmosphere.