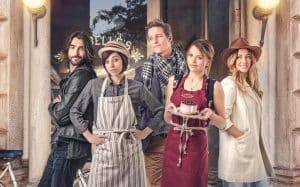 My Bakery in Brooklyn

Vivien and Chloe, two cousins, inherit the pastry from Isabelle’s aunt in Brooklyn. Chloe would like to renew the pastry giving it a new look and creating a diverse selection of products, while Vivien wants to be sure that everything stays exactly as it is. The clash of ideas leads to a very unique solution: decide to divide the store in half so that each of the two can handle his side as he sees fit. All this while the looming shadow of a bank which granted them only a short period of time before expropriate because of debts that Isabelle has left.
There are sweet when the overabundance of elements ends up perplex those tasting them: what was the real taste? There are films whose script is written so as to explore too many paths without being able to focus on anyone. This is the case of this the Spaniard Gustavo Ron who faces a myriad of possible references to generate so much stereotyped.
Indeed, we have yet another story of a place that should feed the collective memory and which is likely because of the greed of a bank to close forever. We are faced with three events-oriented romantic comedy innervated by a staggering predictability. There is no lack of attempts to insert an extravagant character (the blind person who ‘reads’ the footwear and the drug dealer / investigator Russian). And then conclude with a dash of thriller just to do nothing missing. Whereas the viewer ends up missing a lot when you find yourself wondering which way to have the citations least risky as the glimpses that Sergio Leone was able to offer us in Once Upon a Time in America or those chords of the soundtrack that are so think of The Postman but without having the evocative power (although at one point he cites Neruda).