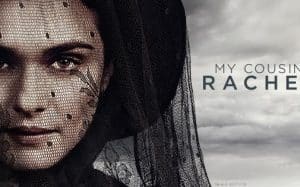 Taken from the same novel, the film tells the story of a young orphan, Philip, who believes that her beautiful and mysterious cousin Rachel may be responsible for the murder of her husband, her beloved Ambrose guardian. As Philip pays revenge, his feelings for Rachel become complicated.
The film is the remake of the 50’s film of the same name, then featuring Richard Burton and Olivia De Havilland.