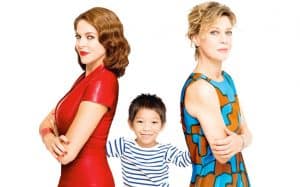 Lucia is a psychologist for dogs that describes how anxious and inadequate, as only natural fibers and shapeless clothes and cry against animal protein. Fabiola is the manager of an estate agent and rampant aggressive, perpetually wrapped in suits members and climbing on the heel 12. They could not be more different but they share a man, Paul, who was the husband of Lucia and is the current husband Fabiola. When Paul disappears leaving behind the little Pauline, a child for half of China which both women knew nothing, Lucia and Fabiola must necessarily dating and find a way to coexist.
The Odd Couple yet another of the big screen this time is entirely female, and supported by some artists of value even behind the scenes, from the screenwriter Doriana Leondeff to producer Donatella Botti. Director Luca Lucini’s, which has the agile comedy time but tends to skate on the surface, and to cover with a glamorous sheen issues suggested by scripts. It works well the chemistry between the two lead actresses: Buy and Gerini are really a funny odd couple even in the collective imagination, and wisely embroider on the public perception of their characters to give more facets to Lucia and Fabiola.
Especially Claudia Gerini tackles confident manner the role of Fabiola, without fear of appearing heavy or politically incorrect: one has the impression that you would be pushed even further, with greater comic effect, if directed gliel’avesse allowed. Margherita Buy, as in Me and her, makes generous shoulder and comic counterpoint, and it is encouraging to see two adult women (and two consummate craft actresses) in the center of the plot, secure of their acting ability but also of a femininity able to assert itself independently abbot external, be it organic cotton or spandex. It also works fast and free of narrative rhythm melensaggini, leaving enough room to the two actresses to create those extemporaneous improvisations that are the spice of comedy.
Less effective writing, which often relies on stereotypes and creates comic situations below the possibilities of the two performers, both perfectly capable of handling more sophisticated material in terms of adult humor, and the direction, which confuses lightness superficially, telling once again an Italy from glossy magazine that has little to do with the country tragicomic we live.