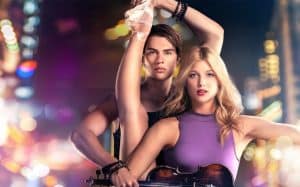 Ruby is a ballet dancer, on her first day in the Big Apple to attend the conservatory in Manhattan. Johnny is a street violinist who plays in the subway. A clash between hip hop crew, in the underground metro, creates confusion and gives the two a chance to meet but also to a couple of thieves to steal Johnny his only treasure, the violin of his grandfather. Overcoming the differences in character and approach, Ruby and Johnny participating in a school contest for dance and violin, with the hope of getting the enrollment at the conservatory for the talented guy and beat its poblemi with the saw.
From legwarmers of Fame in scripts reality television, the genre “wannabe artist” mixes effectively for some time with the movie college and responds perfectly to the dramatic demand of classic American cinema, with its three acts manualistici and his philosophy of the second chance. New York Academy does not tell anything new, basically placing the wake of Step Up, but has the advantage not just to recognize the existence of what has been before and skipping unnecessary preambles and give a series of naivety, tied usually the main characters, which push in the direction of the fairy tale but they are not easy to tell a minimally demanding public.
The best news, in fact, they are right on the front of the protagonists: Ruby and Johnny are not Romeo and Juliet, their love is not hindered from the outside, nor is she the first provincial round, ready to fall victim of the boy’s charm more virtuous in the art and arrogant in life, or he is a true penniless, as it is clear that this is a temporary situation, to one that was bred to classical music and (hot) tango lessons. Ruby and Johnny fight against real problems, as the legislative restrictions on immigration American soil, and against the film source superstructures that the character he should be loath, to allure, to seize the best institutional opportunities that can happen , and that she should uncover magically inhabited by a black soul that makes them beat in the blood in the basin and the time of hip hop, while his body does not know does he is pirouettes and poses ultraclassiche. All this, together with the challenge between two knights of Ruby at the party, run the tip of the bow instead of a sword, creates a basic lack of realism and hyper-realism of seasoning mixture that, if anything, is unusual and appealing. Washed down with a perfect cast in order and a final number that does not enchant some with special effects, but, in his bold and sometimes cacophonous running, but really puts flea in his ear to the industry for a possible coupling between commercial sound and arts classical tradition. When the cinema is business, you might as well do it with their hands revealed.