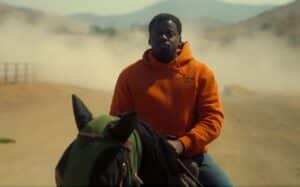 OJ and Emerald Haywood, brother and sister, inherited a ranch in Agua Dolce, not far from Hollywood, after the death of their father Otis sr., Which occurred in circumstances difficult to explain scientifically. The family business involves training wild horses for the film industry, but the Haywoods have far more noble origins and claim to descend from the Bahamian jockey immortalized by Eadweard Muybridge in the 1878 sequence of photographs, known as the first succession. of moving images (essentially the first film) ever shot. While OJ tries to sell his horses to Jupiter, a former actor who became the owner of a western amusement park in Agua Dolce, increasingly strange and inexplicable facts occur at the Haywood ranch, so much so that one thinks of an extraterrestrial and hostile presence.
Introducing a film with a little-known biblical quote, whose clear philosophical intent we will understand as we go along, means raising the bar right from the start. Following a linear path, which leads from Scappa – Get Out to here, passing through Noi, Peele grows in awareness of his own abilities and in audacity, driven by a systemic and all-encompassing will that looks to the great masters of cinema, such as Spielberg and Kubrick.
This does not mean being able to approach it with a lot of wisdom, but to highlight how the titanic effort to produce films that live up to expectations in terms of entertainment and theoretical reflection is an ambitious will but a privilege of a few. Jordan Peele is certainly among them.
One of the main themes concerns again the work of removing the African-American contribution to the history of the West. In this particular case to the history of cinema, given that the sequence by Eadweard Muybridge repeatedly taken up in Nope clearly depicts a black man, whose identity no one knows (unlike the white and British Muybridge, who has taken all the merit). This is the origin of Peele’s narrative device, which gives a fictitious identity to the jockey and chooses his hypothetical descendants as protagonists of the film: the Haywood family.
OJ and Emerald, who have experienced the attitude of Hollywood and its history of repression on their own skin, in practice show however that they inexorably belong to the “society of the spectacle”, seen in the sense of Guy Debord’s situationism. That is, even the Haywoods are prisoners, no less than their “antagonists”, of an illusion. That of a life far from reality, perennially unsatisfactory, and close to the perception of it, mediated by digital screens and sprinkled with stardust.
An American dream that once again passes through Hollywood, with inverse proportionality to the state of health of the same: the more the cinema industry is in crisis or has an uncertain future, the more the need to believe in the dream factory grows. Because the unfulfilled desire does not respond to real data, but to the gap between this and the feeling of a lack, amplified by means – social networks, bombardment of images of stars, the need to photograph and film everything for it to become true – designed to produce dissatisfaction and to make perpetual consumers of the capitalist system.